Steve and Fawn Kippenberg said they hit many lows in their decade-long battle with pain-pill and heroin addiction. The Ohio couple was evicted from multiple homes. Both contracted hepatitis C from injecting drugs with dirty needles. 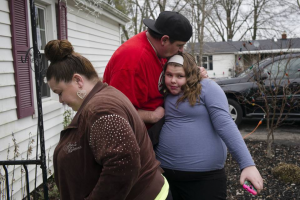 But nothing compares to the day that child-protective-services workers knocked on their door and took three of their children into custody because of safety concerns. The children were away for several months while the couple worked to get clean. “My whole world dropped right there,” said Mr. Kippenberg, 42 years old. “That was my rock bottom.”

Abuse of opioids like heroin and prescription painkillers is straining child-welfare agencies across the U.S. and sending more children into foster care, officials say. Addiction treatment for opioids only occasionally succeeds, relapse is common and children often languish for years in the system.

The number of children in foster care nationwide as of September 2014 rose 3.5% from a year earlier to 415,129, according to the latest data collected by the Administration for Children and Families, part of the U.S. Department of Health and Human Services.

The national data don’t specifically measure how many children land in foster care as a result of their parents’ drug use, but some state and local officials say opioid addiction is likely contributing to the increase. The epidemic is being fueled by the overprescribing of pain pills coupled with a cheap and abundant supply of heroin, drug experts say.

In Vermont, opioid use was a factor in 80% of cases in which a child under the age of 3 was taken into custody, according to one state survey. The number of children under the custody of the Department for Children and Families as of last September grew 40% from two years earlier to 1,373, driven mainly by parental opioid addiction, according to Gov. Peter Shumlin. The Democrat unveiled a proposal last month to beef up the state’s child-welfare system.

According to the Vermont DCF, the state looks first for an appropriate relative who can care for children taken away from parents abusing opioids. If relatives aren’t an option, the state places the children with foster families.

The Indiana Department of Child Services added 459 family case managers in the past two years to help handle a rising tide of cases. The agency estimates 2,600 children had to be removed from homes due to parental drug abuse in a six-month period that ended last March, a 71% jump from two years earlier. “I don’t think anybody expected the explosion of heroin,” said agency director Mary Beth Bonaventura.

Cases involving parental opioid addiction are particularly complex, said Susan Kovac, regional general counsel at the Knox County Department of Children’s Services in Tennessee, which has been grappling with a surge of cases tied in part to opioids. As in many parts of the country, demand for treatment services outstrips supply. For those who get into a program, recovery rates are low, she said.

Another problem, Ms. Kovac said: Because opioid addiction often afflicts numerous members of a family, it can be difficult to find temporary caregivers among a child’s loved ones. That increases the likelihood a child will have to be put in foster care, resulting in higher costs for child-welfare agencies.

Data from the Ohio Department of Job and Family Services show that cases involving parents who use heroin or cocaine take longer to close, and are reopened at a faster rate, than those involving parents who aren’t on either drug. Because opioid cases often involve crisis situations, they tend to take priority, forcing other cases “to take a back seat,” said Angela Sausser, executive director of the Public Children Services Association of Ohio.

In response, some states are trying to summon more resources. Mr. Shumlin’s plan in Vermont calls for adding 28 social workers and one superior court judge, among other positions. The Tennessee Department of Children’s Services recently requested 52 more investigators.

Ohio has created 20 family dependency treatment courts that offer an alternative judicial track for parents dealing with drug addiction. One is in Clermont County, just east of Cincinnati, where about 70% of the child-welfare cases are drug-related, according to Timothy Dick, assistant director of the county’s Department of Job and Family Services.

Among them is the Kippenbergs’. The couple entered the program shortly after losing custody of their children in September 2014. As a result, they must comply with the court’s rigorous demands: weekly appearances before a judge initially, regular drug tests and enrollment in treatment programs. The Kippenbergs say they have been clean for 16 months and expect to graduate soon from the program.

Last March, they regained custody of their three children, as well as a fourth who had been staying with a relative. They just celebrated their first sober Christmas as a family in years, with turkey, fudge and plenty of presents.

“You should be very proud of what you’ve accomplished,” they said their case workers told them. “Because it’s rare.”